How our shelter dog keeps me sane in these insane times

See this pooch right here? He’s our pit/boxer/plott hound shelter dog, Gartholomew. So named because my partner likes Garth Brooks and I, figuring you could never have enough apostles around, wanted to honor Bartholomew. We also call him Bubs because, well look at him. How could you not?  I want to share how Bubs has kept my mind sane and my heart soft during will-it-ever-stop-year that we call 2020. But first, a bit of backstory.

Bubs came into our lives five years ago today. We adopted him from the no-kill Stray Hearts Animal Shelter in Taos, New Mexico where he spent three years living in a cage. Prior to that, he lived on the streets. In other words, ours is the first home that Bubs has ever had. There’s not a day in these past five years that he hasn’t let us know how grateful he is, right down to finding us after every meal so he can lick our hand or rub up against our leg to say “thank you.”

Here’s why I never miss a chance to say “thank you” back.

Bubs helps me steer clear of unnecessary drama. When we first met Gartholomew, he was sitting in his dog run.  Around him was total chaos. Dogs barking, jumping, crying. Bubs just sat there in silence, calmly wagging his tail, refusing to be drawn into the drama of his fellow cellmates. Five years later, he’s still not a fan of drama. In fact, when I find myself on the verge of having yet another COVID-19 meltdown or, worse, being drawn into some cancel culture drama on social media, Gartholomew just gives me a look like this, as if to say, “You know better. Knock it off so I can go back to sleep.” 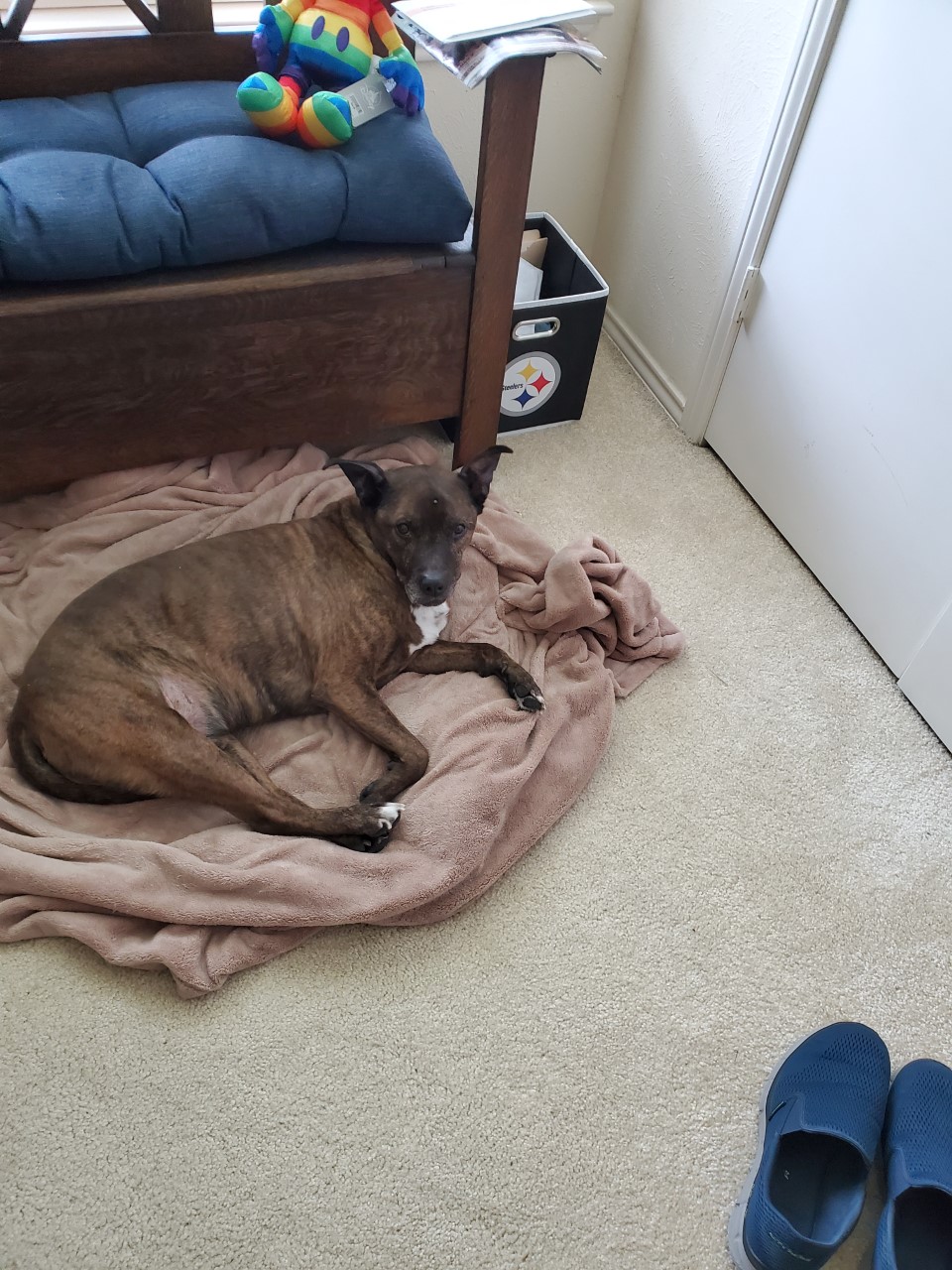 He helps me remember the brilliance of the power nap. Speaking of sleep, I should let you know that Bubs is a big fan. As in, the only two things he enjoys more than sleep are pooping and eating. He is the only dog I’ve met who, when stretching, immediately goes from downward dog to lying down dog. His love of sleep has reminded me that power naps can be extremely restorative when going through a global pandemic (especially since three martini lunches are now frowned upon).  And, so, at some point most afternoons, I’ll call out, “Do you want to take a nap?” Within seconds, Garth has not only materialized, but also passed me in the hall and jumped up in the bed where he often is sound asleep with the world’s biggest puppy smile before I can even kick my shoes off. 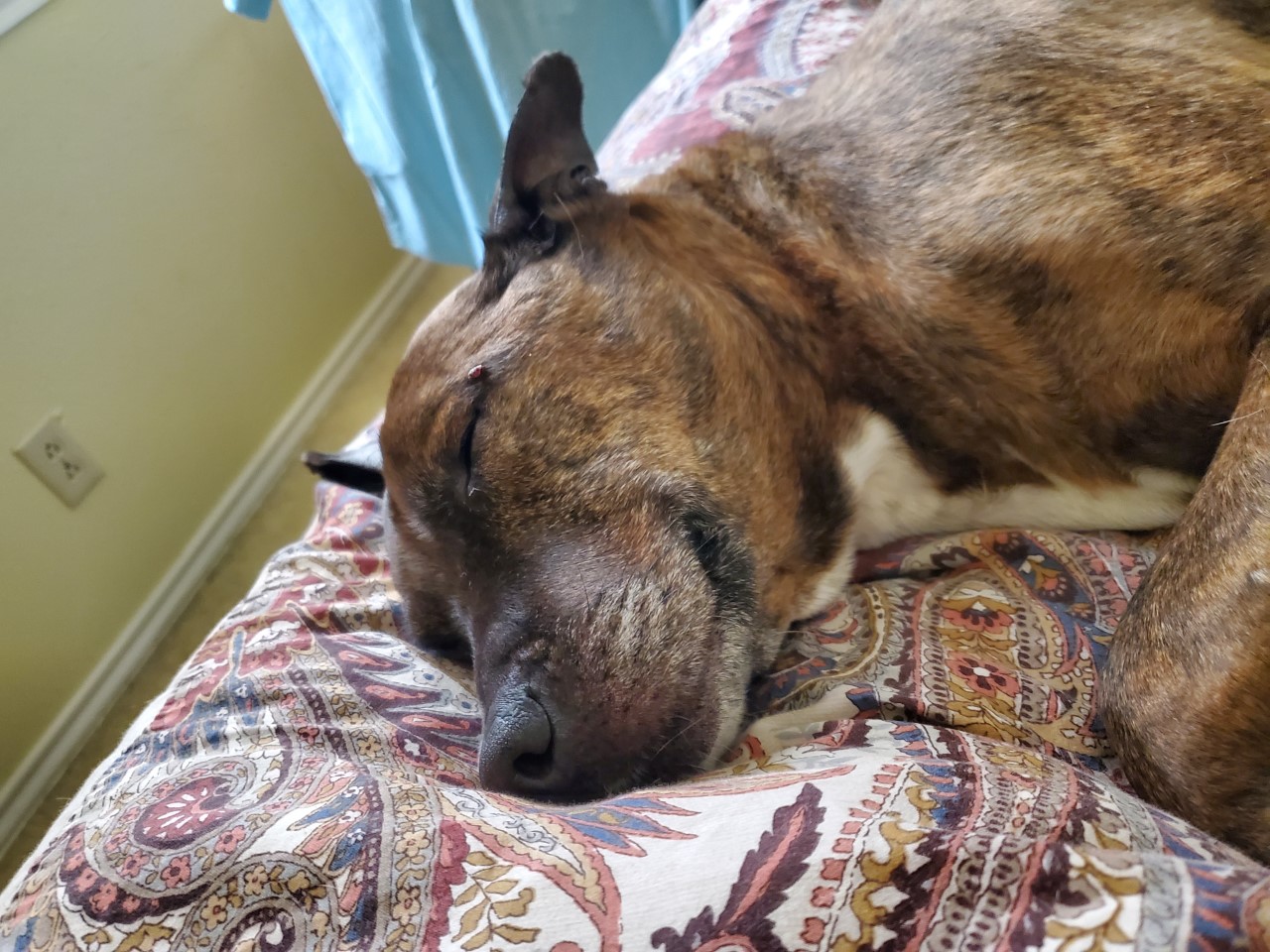 He keeps me safe.  My partner is Gartholomew’s alpha, but I’m his charge. Whether it’s running interference between me and anyone we encounter on the street, squaring his shoulders for a fight every time that Amazon stops by or shielding me and our entire house from the weekly “attack” of our yard guy, he makes sure I know that keeping me safe is his #1 priority. At a time when our federal government can’t seem to keep any of us safe, it’s downright comforting to know that I have a dog who at least tries to pick up some of the slack.

He won’t let me work too late.  I know a lot of people have found themselves bored during these COVID-times. I am not one of them. Between consulting work, writing and developing a few new projects, my days have stayed full. Bubs is ok with that (as long as we nap). But he’s not ok if daytime fullness stretches into evening. Take last night. I sat down to wrap up some emails around 5. As happens, one thing led to another (and another) and, before I knew it, Gartholomew had his snout on my laptop. It was 7:30. Time to call it a day. 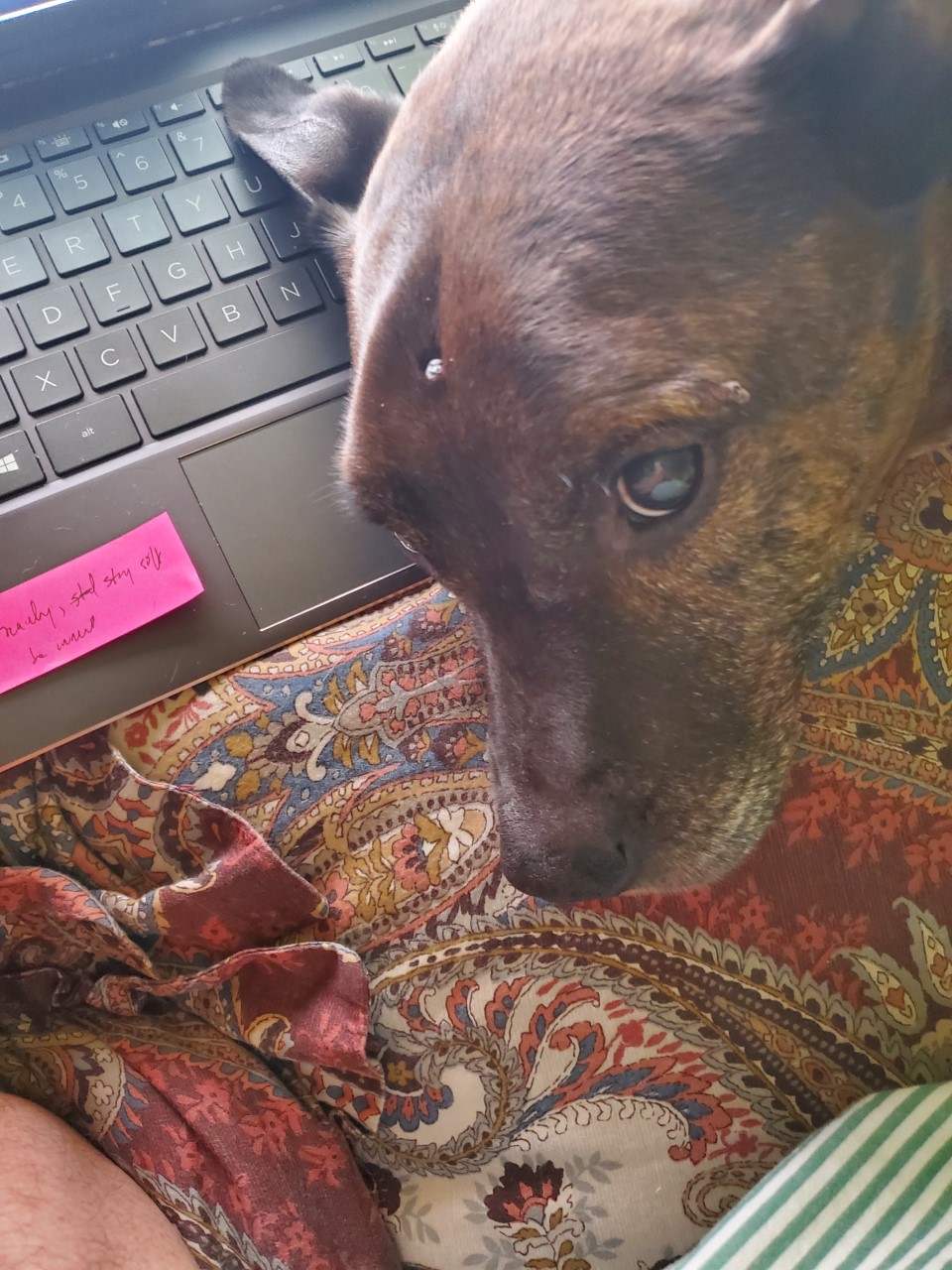 He will insist we play. While he does believe in limiting work, Bubs is all for open-ended play. Many is the morning or evening that, after feeding him, I’ll walk through the den to find him sitting with several of his favorite toys gathered round him. Some days, I’ll tell him that I have too much going on or am too fried from yet another fire hydrant day to play. But then he’ll give me a look or a snort or he’ll drop his toy in my path and I’ll know that resistance is futile. So, I’ll toss his toy down the hall four, five or six times and I’ll remember how silly the notion that play is for kids. How vital it is, especially in times like these, to push away all the stress of being an adult, all the disorienting trauma of being an American right now, and just play with your dog for a few minutes. It seems to put everything else in perspective.

He never stops finding joy. One of my favorite quotes is by Thich Nhat Hanh. It goes like this, “Waking up this morning, I smile. Twenty-four brand new hours are before me.” Gartholomew wakes up each and every morning to the joy of having twenty-four brand new hours (ok, given how much he sleeps, it’s really only ten, but still!).  Outside of a cage. In a home filled with love. I tell ya, it’s contagious. It’s also inspiring. 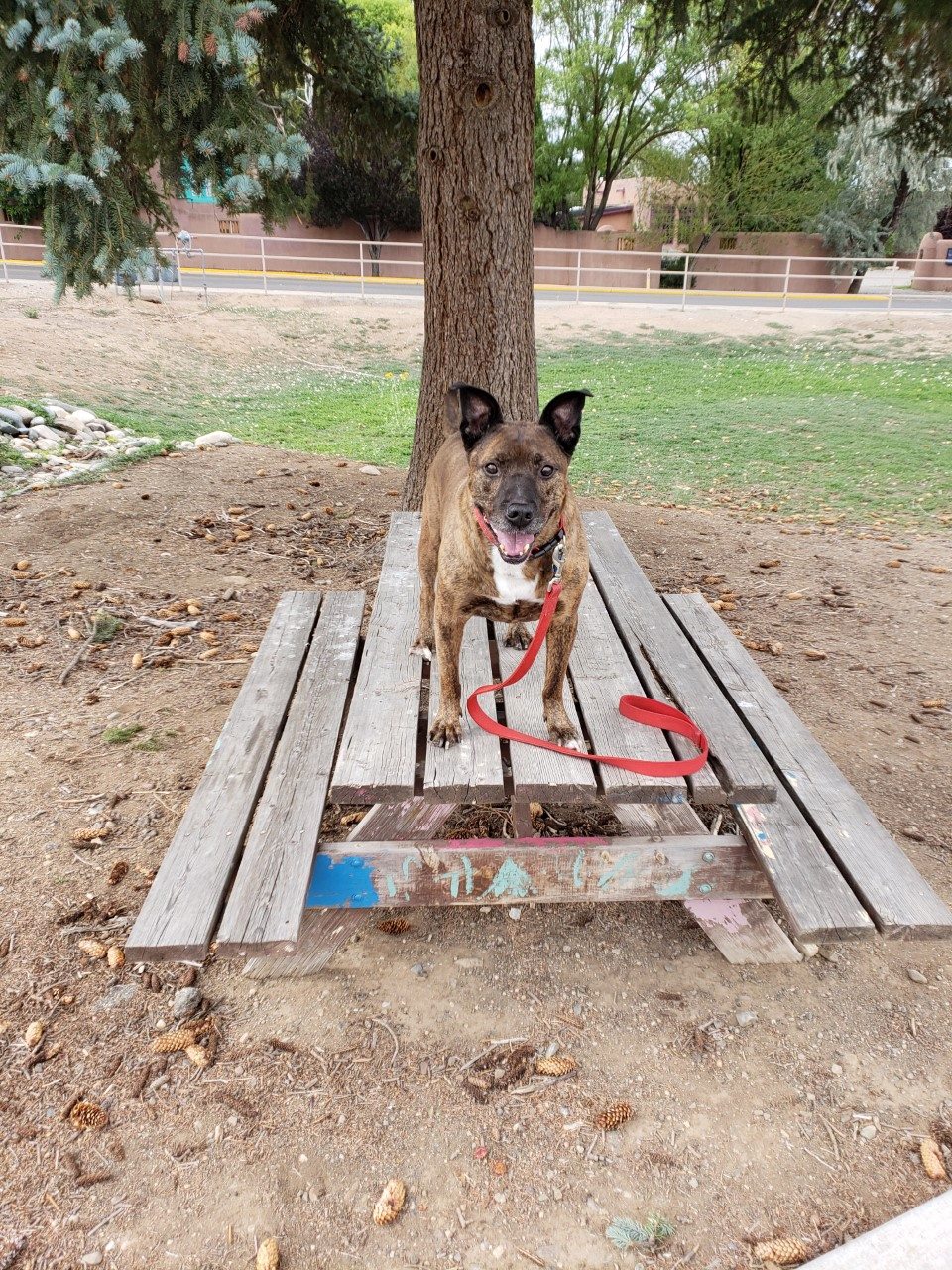 It can be so easy to get dragged down by all the negativity out there,  but you know what? Negativity is only a slice of all the world has to offer. Same with fear, anguish, pain. The majority of the world is filled with beauty. With grace. With wonder.

Sometimes you just need a Bubs in your life to remind you that it is so.

This-n-That is a newsletter that offers perspective, inspiration and compassion for showing up to life’s opportunities and challenges and standing up to your truth.

Signup for The Mom Chronicles Newsletter